Do you like a juicy diagram to locate yourself in a complex context? If so, you are in luck.

The brilliant writers and systems thinkers Margaret Wheatley and Deborah Frieze developed the “Two Loops” model, which describes how complex organizations and all living systems follow a predictable, albeit non-linear, pattern of change. 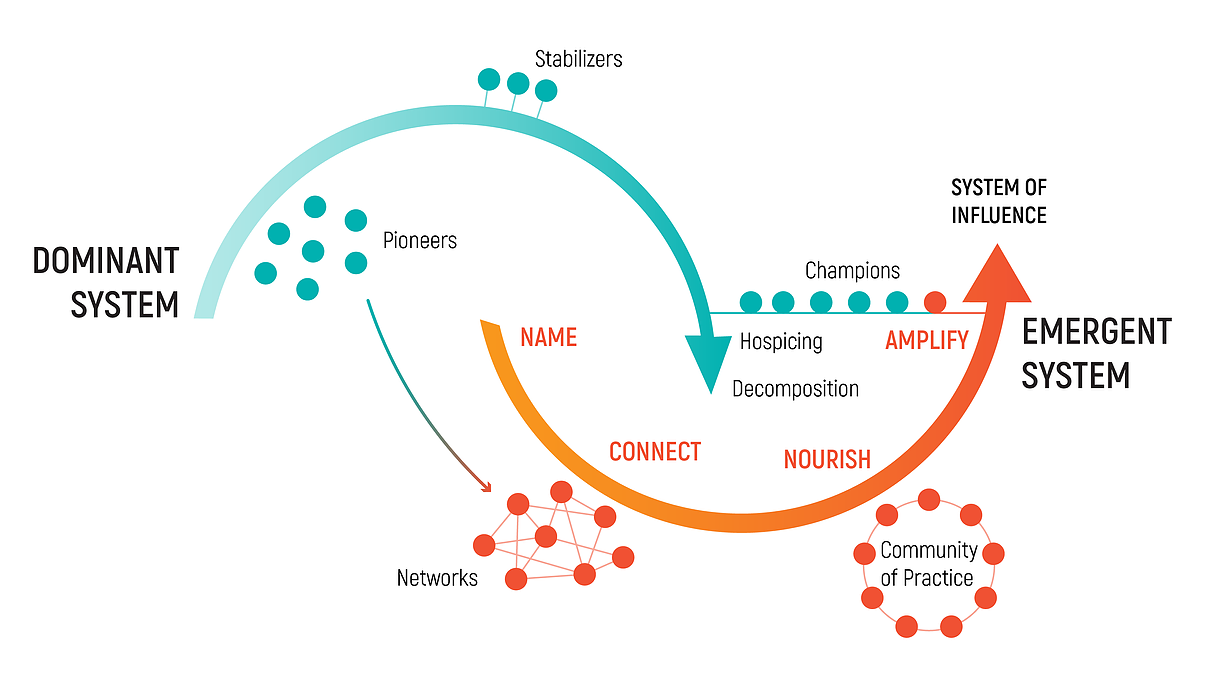 I keep coming back to this image as my home base deals with WTF, what goes on in journalism, other institutions that are the pillars of democracy, and pretty much everything in life.

The dominant system. Most journalism outlets are part of this top loop – the prevailing system. And most are in a state of decline. We see hospice, death and decay in the form of layoffs, consolidations, mergers, hedge fund takeovers and the inevitable total shutdown of news agencies. The attraction to the grave remains quite strong.

The emerging system. But the exciting thing is that in the lower loop – the emergent system – many seeds are sown, watered, and tended.

Here are some of the topics that caught my eye:

So how do newsrooms on the downward trend of the dominant system – those who are not yet hip or able to adopt the business models, qualities, and platforms of the emerging systems – and bypass the compost bin? Here are three practical recommendations.

Going back to the title of this prediction, “The Great Transition,” the word “great” can mean something positive and extraordinary, or something very big. I believe that both interpretations of the word apply to the transition of journalism. The gap between dominant newsroom practices, ownership structures and incentives and what is emerging is indeed wide. So are the pioneers who are either still working within the prevailing system or who have left it, as well as the neighboring practitioners who are new to the system to build the emerging system. In this case, the saying “what you pay attention to grows” serves as an invitation: In which of these two cycles, these two systems do you invest your precious attention in growth?

PS While the people who know me in a journalistic context probably know my work at Hearken – which strives to help the dominant system players transition to emerging – I’ve been working on the emergent system since 2016 by co-founding Zebras Unite. I bet this unity and collection of practitioners has the power to transform journalism more than Hearken can. We’ll see in a decade or so if this underprediction is correct;). In the meantime, those who are interested in what is emerging should definitely follow the work of / at: Nathan Schneider, MEDLab at Boulder, Mara Zepeda, and Exit 2 Community. For entrepreneurs building the next journalism businesses, join Zebras Unite’s free online community.

And if you’re curious about Margaret Wheatley, the brilliant thinker who helped create the Two Loops model and more, I had the chance to interview her in 2018. I leave this quote from her for you to think about.

It takes a lot of courage and fearlessness to make a decision about how you want to be successful in your profession. Do you want to have moral integrity? Do you want to stand up for your profession and change it? You realize where it is now is pretty miserable. It is up to you to decide if you are one of the people doing your best to change that.

No comments to show.